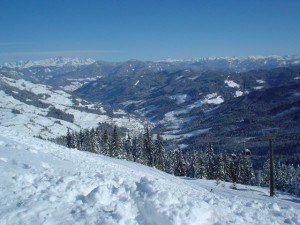 Muhlbach am Hoch König is known by the locals as a “Schneeloch”.
Muhlbach/Dienten/Maria Alm are part of area’s with the highest certainties of snow.
Hoch König is also known for its beautiful surroundings.
Taking off from the Karbach Alm (Muhlbach) you can ski towards Maria Alm and back in a day, a very nice daytrip they do call it “Konigstour” (Kingstour) for a very good reason.
Besides the many kilometres blue, red en black ski-slopes there are more than plenty challenges to be found. For example the different Funparks across Hoch Konig (just in Muhlbach/Dienten there are at least tree parks). 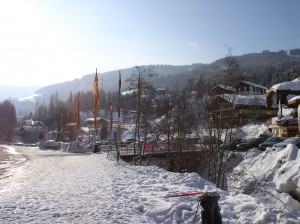 The neighbourhood of Muhlbach is also known for its beautiful “tourski-“ possibilities.
Although the waiting-time for the lifts still small are, the Bergbahnen remain busy renewing and improving in order to live up to the expectations of their guests.
A few years back “Kings Cab” was build and they build new chairlifts in Dienten and Maria Alm. They also build “skibrucken” (ski-bridges), in order to create a real seamless connection between the villages.
The aera has also a number of Skiroutes and backcountry/freeride downhill.
The skiroutes are protected for avalanches, the freeride rides are not.
Throughout the skiing-area there are numerous restaurants and Apresski-bars. 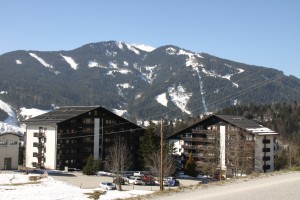 Wright in front of Alpendomizil the Skibus stops,this bus brings you to the Karbachalm, gondola in Muhlbach with wich you can make your entry in Hoch Köch, the slopes of Muhlbach/Dienten/Hintertal and Maria Alm.
This bus can also bring you to   Arthurhaus/ Hoch Keil, a small but very fine separate part of Hoch König at approx. 4 km form Alpendomizil. Arthurhaus is a relatively small but is very child friendly and at these slopes it is really even less busy. And yet there are besides 3 blue slopes, a very nice red slope and a black slope and even a funpark.
There is also a ski-route which brings you al the way to Bischofshofen (12 km, if enough snow in the valley below).

Of course are there in this part of Ski-Amadé several ski corss-country tracks.

Click on the thumbnail to enlarge (ski routes of Ski-Amadé).

Beneath some pictures taken in the Hoch Konig area

Hoch König is part of the very large Skiing Area Ski-Amadé, so your ticket is all over this area valid.
A sidestep to one of the other parts of Ski-Amadé is easily made.
You are there quick
St. Johann/Alpendorf ca 15 min
Flachau ca 20 min
Altenmarkt ca 22 min
Zauchensee ca 35 min
Bad Gastein/ Hofgastein ca 40 min
But there are also a few other area’s (not belonging to Ski-Amadé) which are nearby e.g.
Werfen/Werfenweng ca 20 min
Zell am See ca 40 min
Kaprun (Kitzsteinhorn/ glacier) ca 50 min
The village of Muhlbach has several restaurantswhere you can eat, as well in the centre as on the “Mandelwandstrasse” a bit higher up then Alpendomizil towards Arthurhaus.

In the centre of the village are several stores like: Spar, Backerei Bauer, Sportshops, Skischule, banks and a Tourist Information Office.
Not very far away lies the town of Bischofshofen (8 min.), there are more stores and supermarkets. Bischofshofen has a nice shoppingcenter. But also the village st. Johann im Pongau has a very nice centre.